A triangle or trigon is a two dimensional geometric object that has the specific qualities of having three straight sides that intersect at three vertices.

The sum of the internal angles that exist at the vertices always total the same number for every triangle — 180 degrees, or

In Euclidean geometry, any three non-collinear points determine a unique triangle and a unique plane.

By relative lengths of sides

Triangles can be classified according to the relative lengths of their sides:

Triangles can also be classified according to their internal angles, measured here in degrees.

A triangle that does not contain a right angle is called an oblique triangle. One that does is a right triangle.

The obtuse triangle contains the larger than 90° angle, known as an obtuse angle. The acute triangle is composed of three acute angles, the same as saying that all three of its angles are smaller than 90°.

Triangles are assumed to be two-dimensional plane figures, unless the context provides otherwise (see Non-planar triangles, below). In rigorous treatments, a triangle is therefore called a 2-simplex (see also Polytope). Elementary facts about triangles were presented by Euclid in books 1–4 of his Elements, around 300 BCE.

external angles of any

A few basic postulates and theorems about similar triangles:

Some sufficient conditions for a pair of triangles to be congruent (from basic postulates and theorems of Euclid):

Using right triangles and the concept of similarity, the trigonometric functions sine and cosine can be defined. These are functions of an angle which are investigated in trigonometry.

, and the legs have lengths

, then the theorem states that

The converse is true: if the lengths of the sides of a triangle satisfy the above equation, then the triangle is a right triangle.

Some other facts about right triangles:

For all triangles, angles and sides are related by the law of cosines and law of sines.

Points, lines and circles associated with a triangle

There are hundreds of different constructions that find a special point associated with (and often inside) a triangle, satisfying some unique property: see the references section for a catalogue of them. Often they are constructed by finding three lines associated in a symmetrical way with the three sides (or vertices) and then proving that the three lines meet in a single point: an important tool for proving the existence of these is Ceva's theorem, which gives a criterion for determining when three such lines are concurrent. Similarly, lines associated with a triangle are often constructed by proving that three symmetrically constructed points are collinear: here Menelaus' theorem gives a useful general criterion. In this section just a few of the most commonly-encountered constructions are explained.

An angle bisector of a triangle is a straight line through a vertex which cuts the corresponding angle in half. The three angle bisectors intersect in a single point, the incenter, the center of the triangle's incircle. The incircle is the circle which lies inside the triangle and touches all three sides. There are three other important circles, the excircles; they lie outside the triangle and touch one side as well as the extensions of the other two. The centers of the in- and excircles form an orthocentric system.

A median of a triangle is a straight line through a vertex and the midpoint of the opposite side, and divides the triangle into two equal areas. The three medians intersect in a single point, the triangle's centroid. The centroid of a stiff triangular object (cut out of a thin sheet of uniform density) is also its center of gravity: the object can be balanced on its centroid. The centroid cuts every median in the ratio 2:1, i.e. the distance between a vertex and the centroid is twice the distance between the centroid and the midpoint of the opposite side.

The midpoints of the three sides and the feet of the three altitudes all lie on a single circle, the triangle's nine-point circle. The remaining three points for which it is named are the midpoints of the portion of altitude between the vertices and the orthocenter. The radius of the nine-point circle is half that of the circumcircle. It touches the incircle (at the Feuerbach point) and the three excircles.

The center of the incircle is not in general located on Euler's line.

If one reflects a median at the angle bisector that passes through the same vertex, one obtains a symmedian. The three symmedians intersect in a single point, the symmedian point of the triangle.

Computing the area of a triangle

Calculating the area of a triangle is an elementary problem encountered often in many different situations. The best known and simplest formula is:

is the length of the base of the triangle, and

is the height or altitude of the triangle. The term 'base' denotes any side, and 'height' denotes the length of a perpendicular from the point opposite the side onto the side itself.

The area of a triangle is the area of any quadrilateral divided by 2, therefore the following formulas are:

Although simple, this formula is only useful if the height can be readily found. For example, the surveyor of a triangular field measures the length of each side, and can find the area from his results without having to construct a 'height'. Various methods may be used in practice, depending on what is known about the triangle. The following is a selection of frequently used formulae for the area of a triangle.

Another way to find the area of a triangle:

therefore the formula is:

The area of a parallelogram can be calculated using vectors. Let vectors

. The area of parallelogram ABDC is then

, which is the magnitude of the cross product of vectors

The area of triangle ABC is half of this, or

The area of triangle ABC can also be expressed in terms of dot products as follows:

The height of a triangle can be found through an application of trigonometry. Using the labelling as in the image on the left, the altitude is

. Substituting this in the formula

derived above, the area of the triangle can be expressed as:

, and similarly for the other two angles:

For a right triangle:

If vertex A is located at the origin

For three general vertices, the equation is:

In 3 dimensions, the area of a general triangle

is the Pythagorean sum of the areas of the respective projections on the three principal planes (i.e.

The shape of the triangle is determined by the lengths of the sides alone. Therefore the area

also can be derived from the lengths of the sides. By Heron's formula:

is the semiperimeter, or half of the triangle's perimeter. 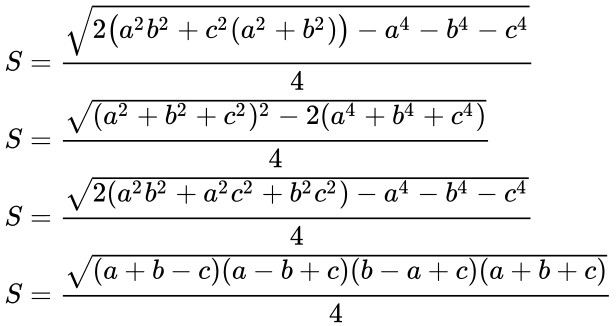 Computing the sides and angles

In general, there are various accepted methods of calculating the length of a side or the size of an angle. Whilst certain methods may be suited to calculating values of a right-angled triangle, others may be required in more complex situations.

In right triangles, the trigonometric ratios of sine, cosine and tangent can be used to find unknown angles and the lengths of unknown sides. The sides of the triangle are known as follows:

Note that this ratio does not depend on the particular right triangle chosen, as long as it contains the angle

, since all those triangles are similar.

The acronym "SOHCAHTOA" is a useful mnemonic for these ratios.

There are many useful mnemonics that go with SOHCAHTOA, like "Some Old Hippie Caught A High Tripping On Acid"

The inverse trigonometric functions can be used to calculate the internal angles for a right angled triangle with the length of any two sides.

The sine and cosine rules

Main articles: Law of sines and Law of cosines

The law of sines, or sine rule,[2] states that the ratio of the length of side

to the sine of its corresponding angle

is equal to the ratio of the length of side

to the sine of its corresponding angle

For a triangle with length of sides

respectively, given two known lengths of a triangle

, and the angle between the two known sides

(or the angle opposite to the unknown side

), to calculate the third side

, the following formula can be used:

For a right triangle:

Trigonometric functions of half angles in a triangle 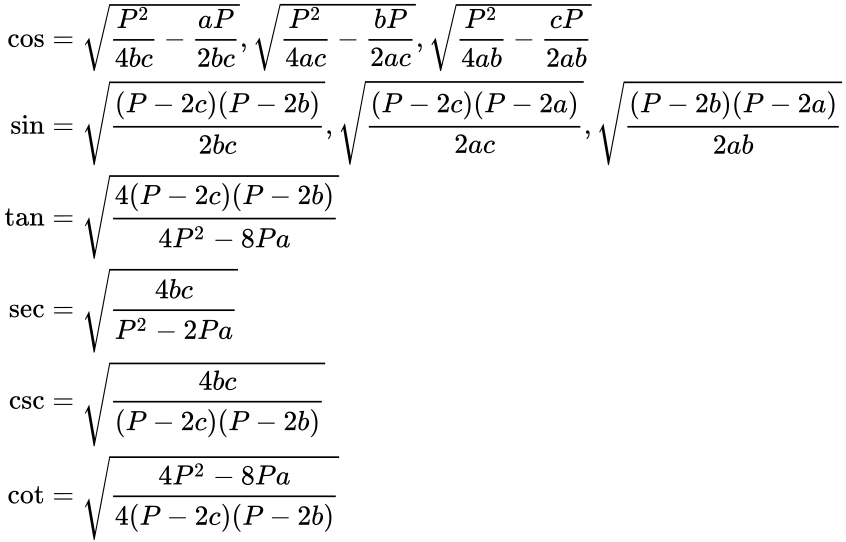