The term orthographic is also sometimes reserved specifically for depictions of objects where the axis or plane of the object is also parallel with the projection plane,[1] as in multiview orthographic projections.

The orthographic projection has been known since antiquity, with its cartographic uses being well documented. Hipparchus used the projection in the 2nd century BC. to determine the places of star-rise and star-set. In about 14 BC, Roman engineer Marcus Vitruvius Pollio used the projection to construct sundials and to compute sun positions.[2]

Vitruvius also seems to have devised the term orthographic (from the Greek orthos (= “straight”) and graphē (= “drawing”) for the projection. However, the name analemma, which also meant a sundial showing latitude and longitude, was the common name until François d'Aguilon of Antwerp promoted its present name in 1613.[2]

A simple orthographic projection onto the plane

can be defined by the following matrix:

, the transformed point would be 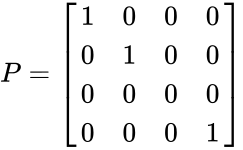 For each homogeneous vector

, the transformed vector would be

In computer graphics, one of the most common matrices used for orthographic projection can be defined by a 6-tuple, (left, right, bottom, top, near, far), which defines the clipping planes. These planes form a box with the minimum corner at (left, bottom, near) and the maximum corner at (right, top, far).

The box is translated so that its center is at the origin, then it is scaled to the unit cube which is defined by having a minimum corner at

and a maximum corner at

The orthographic transform can be given by the following matrix:

With multiview orthographic projections, up to six pictures of an object are produced, with each projection plane parallel to one of the coordinate axes of the object. The views are positioned relative to each other according to either of two schemes: first-angle or third-angle projection. In each, the appearances of views may be thought of as being projected onto planes that form a 6-sided box around the object. Although six different sides can be drawn, usually three views of a drawing give enough information to make a 3D object. These views are known as front view, top view and end view.

Within orthographic projection there is the subcategory known as pictorials. Axonometric pictorials show an image of an object as viewed from a skew direction in order to reveal all three directions (axes) of space in a single picture.[3] Orthographic pictorial instrument drawings are often used to approximate graphical perspective projections, but there is attendant distortion in the approximation. Because pictorial projections inherently have this distortion, in the instrument drawing of pictorials, great liberties may then be taken for economy of effort and best effect. Orthographic pictorials rely on the technique of axonometric projection ("to measure along axes").