, then we say that

The concept of a limit is essentially what separates the field of calculus, and analysis in general, from other fields of mathematics such as geometry or algebra.

The concept of a limit may apply to:

can approach to '2' from two sides:

Meaning of a limiting value

comes close and stays close to

then we say that

is the limit of

converges to is called the limit point.

In notation, it is written as

from the right, then

is called as the right hand limit of

Right hand limit can be expressed in two ways:-

from the left, then

is called the left hand limit of

. The left hand limit can be expressed in two ways:-

is a positive real number, that we let approach 0..

For existence of limit at

is coming closer to 2 but it is less than '2'. So, observe the situation in table below:

If a limit approaching infinity is a real value, then as the variable gets larger and larger, the limit converges.

Limits can also be equal infinity:

On a graph, an infinite limit would appear to skyrocket or plummet to the top and bottom edges of the graph (asymptote).

If the function is continuous, limits can be evaluated by directly substituting the variable with the value it approaches. For example, because the cubic is continuous we have

In the limit below, direct substitution will give a false answer. 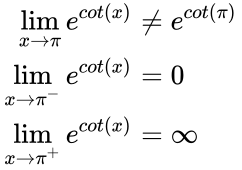 Graphing will show that

is not continuous at

When a discontinuous function is improperly computed using direct substitution, one of the following peculiar results may be concluded:

The indeterminate forms do not provide enough information to identify the real limit.

The limits below are unequal. If they are directly substituted, they reach an indeterminate form and cannot be distinguished. 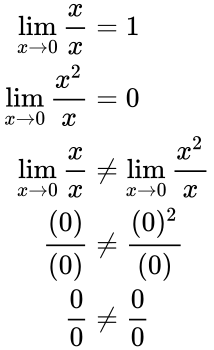 Discontinouities can be eliminated through algebraic manipulation.