In geometry, an icosahedron (Greek: eikosaedron, from eikosi twenty + hedron seat; /ˌaɪ.kəʊ.sə.ˈhi.dɹən/; plural: -drons, -dra /-dɹə/) is any polyhedron having 20 faces, but usually a regular icosahedron is implied, which has equilateral triangles as faces.

The regular icosahedron is one of the five Platonic solids. It is a convex regular polyhedron composed of twenty triangular faces, with five meeting at each of the twelve vertices. It has 30 edges and 12 vertices. Its dual polyhedron is the dodecahedron.

If the edge length of a regular icosahedron is

, the radius of a circumscribed sphere (one that touches the icosahedron at all vertices) is

while the midradius, which touches the middle of each edge, is

) is the golden ratio.

of a regular icosahedron of edge length 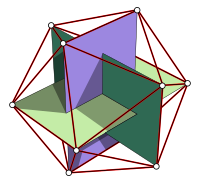 The following Cartesian coordinates define the vertices of an icosahedron with edge-length 2, centered at the origin:

The 12 edges of a regular octahedron can be partitioned in the golden ratio so that the resulting vertices define a regular icosahedron. This is done by first placing vectors along the octahedron's edges such that each face is bounded by a cycle, then similarly partitioning each edge into the golden mean along the direction of its vector. The five octahedra defining any given icosahedron form a regular polyhedral compound, as do the two icosahedra that can be defined in this way from any given octahedron.

Construction by a system of equiangular lines

In order to construct such an equiangular system, we start with the matrix 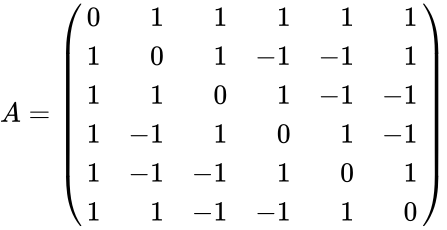 adjacent to a first vertex

of an icosahedron centered at the origin.)

, both with multiplicity 3 since

is symmetric and of trace 0. The matrix

induces thus an Euclidean structure on the quotient space

which is isomorphic to

has dimension 3. The image under the projection

of the six coordinate axes

forms thus a system of six equiangular lines in

intersecting pairwise at a common acute angle of

yields thus the twelve vertices of the icosahedron.

acting by direct isometries on the icosahedron.

According to specific rules defined in the book The fifty nine icosahedra, 59 stellations were identified for the regular icosahedron. The first form is the icosahedron itself. One is a regular Kepler-Poinsot solid. Three are regular compound polyhedra.[1]

There are distortions of the icosahedron that, while no longer regular, are nevertheless vertex-uniform. These are invariant under the same rotations as the tetrahedron, and are somewhat analogous to the snub cube and snub dodecahedron, including some forms which are chiral and some with Th-symmetry, i.e. have different planes of symmetry from the tetrahedron. The icosahedron has a large number of stellations, including one of the Kepler-Poinsot polyhedra and some of the regular compounds, which could be discussed here.

The icosahedron is unique among the Platonic solids in possessing a dihedral angle not less than 120°. Its dihedral angle is approximately 138.19°. Thus, just as hexagons have angles not less than 120° and cannot be used as the faces of a convex regular polyhedron because such a construction would not meet the requirement that at least three faces meet at a vertex and leave a positive defect for folding in three dimensions, icosahedra cannot be used as the cells of a convex regular polychoron because, similarly, at least three cells must meet at an edge and leave a positive defect for folding in four dimensions (in general for a convex polytope in

dimensions, at least three facets must meet at a peak and leave a positive defect for folding in n-space). However, when combined with suitable cells having smaller dihedral angles, icosahedra can be used as cells in semi-regular polychora (for example the snub 24-cell), just as hexagons can be used as faces in semi-regular polyhedra (for example the truncated icosahedron). Finally, non-convex polytopes do not carry the same strict requirements as convex polytopes, and icosahedra are indeed the cells of the icosahedral 120-cell, one of the ten non-convex regular polychora.

A rectified icosahedron forms an icosidodecahedron.

When an icosahedron is inscribed in a sphere, it occupies less of the sphere's volume (60.54%) than a dodecahedron inscribed in the same sphere (66.49%).

Also, as these are duals, it is possible to transform one into the other(See below).

In 1904, Ernst Haeckel described a number of species of Radiolaria, including Circogonia icosahedra, whose skeleton is shaped like a regular icosahedron. A copy of Haeckel's illustration for this radiolarian appears in the article on regular polyhedra.

An icosahedron is the three-dimensional game board for Icosagame, formerly known as the Ico Crystal Game.

An icosahedron is used in the board game Scattergories to choose a letter of the alphabet. Six little-used letters, such as X, Q, and Z, are omitted.

Inside a Magic 8-Ball, various answers to yes-no questions are printed on a regular icosahedron.

The icosahedron displayed in a functional form is seen in the Sol de la Flor light shade. The rosette formed by the overlapping pieces show a resemblance to the Frangipani flower.

If each edge of an icosahedron is replaced by a one ohm resistor, the resistance between opposite vertices is 0.5 ohms, and that between adjacent vertices 11/30 ohms.[2]