In geometry, Heron's (or Hero's) formula states that the area

of a triangle whose sides have lengths

is the semiperimeter of the triangle:

Heron's formula can also be written as:

The formula is credited to Heron of Alexandria, and a proof can be found in his book, Metrica, written c. A.D. 60. It has been suggested that Archimedes knew the formula, and since Metrica is a collection of the mathematical knowledge available in the ancient world, it is possible that it predates the reference given in the work.[1]

A formula equivalent to Heron's namely:

was discovered by the Chinese independently of the Greeks. It was published in Shushu Jiuzhang (“Mathematical Treatise in Nine Sections”), written by Qin Jiushao and published in A.D. 1247.

A modern proof, which uses algebra and trigonometry and is quite unlike the one provided by Heron, follows. Let

be the sides of the triangle and

the angles opposite those sides. We have

by the law of cosines. From this we get the algebraic statement:

The altitude of the triangle on base 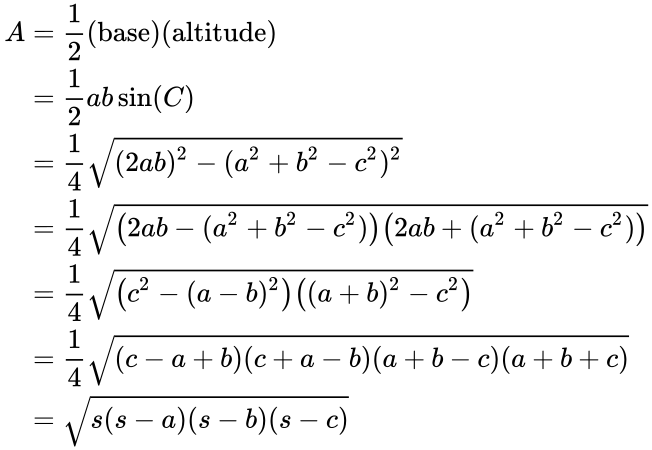 The difference of two squares factorization was used in two different steps.

Heron's original proof made use of cyclic quadrilaterals, while other arguments appeal to trigonometry as above, or to the incenter and one excircle of the triangle [1]. The following argument reduces Heron's formula directly to the Pythagorean theorem using only calculus means.

Heron's formula as given above is numerically unstable for triangles with a very small angle. A stable alternative[2] involves arranging the lengths of the sides so that: a ≥ b ≥ c and computing

The parentheses in the above formula are required in order to prevent numerical instability in the evaluation.

Expressing Heron's formula with a determinant in terms of the squares of the distances between the three given vertices, 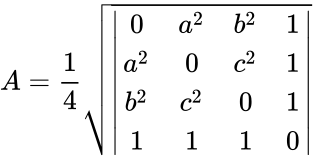 illustrates its similarity to Tartaglia's formula for the volume of a three-simplex.

Another generalization of Heron's formula to polygons inscribed in a circle was discovered by David P. Robbins.Template:Fix/category[citation needed]

If U, V, W, u, v, w are lengths of edges of the tetrahedron (first three form a triangle; u opposite to U and so on), thenTemplate:Fix/category[citation needed]