Formula for Area Bounded by a Circle/Proof

Construct a circle of radius

in standard position—that is, with center at

. Plot the radius of the circle

such that it lies in the first quadrant of the Cartesian plane. Let

represent the angle subtended by r and the x-axis (see figure at right). By the Pythagorean theorem:

represent the area of the circle. Then,

Our integral resists solution as is, impeded by the radical. Note that

Substituting the trigonometric identity into the integral, we obtain:

Which cannot be evaluated without changing the variable of integration. Beginning with:

Substituting back into the integral and taking care to change the interval of integration, we arrive at:

If a circle were cut into equal slices and alternatively staggered such that it resembled a rectangle having two flat opposite ends and the other two opposite ends were rounded with the curvature of circles edge. As illustrated in the image. 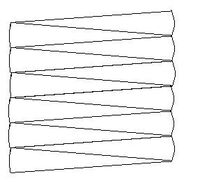 The area of this rectangle may be approximated by multiplying the length and width, in this case the radius by what would be less than one-half the circumference.

We will assume you know that any function

rotated around the y-axis has a volume of

This can be proved using Shell integration, a method which never uses the area of a circle, only the circumfrence. Set

is just an indpendent variable with no relation to

what so ever.) We get a cylinder with a height

is our formula for our volume. Evaluate the integral, and we get

as our formula for the area of a cylinder. A cylinder with a base

, will have a volume