On the macroscopic human level of reasoning and perceiving, three-dimensional Euclidean space geometries are sufficient and practical. It is the case, however, that real space in our real physical world does in fact curve (see the General Theory of Relativity, by Albert Einstein). It is also theorized by many physicists that our universe has 11 unique spacial dimensions, only three of which are perceivable by us. 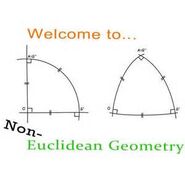 An Example of Non-Euclidean Geometry