The Basel problem was the problem to evaluate the sum

This is also related to the Riemann Zeta function as precisely

First, we will prove the sum converges using the integral test: Let

is positive and decreasing on this interval, so the integral test can be applied.

This is finite, so by the integral test the series converges. The next problem is to what value does it converge?

Leonhard Euler was the first one to develop a clever approach to "solve" the problem, though not as rigorously as required. We will first demonstrate this approach and then give a rigorous proof.

The power series for the sine function is

so it holds that:

which we can be written out as

It is obvious that the coefficient of

. We will now obtain this coefficient through a different method. Obviously, the LHS function has zeroes at every integer that is a multiple of

. Through polynomial factoring, we obtain that we can show this as

Using the difference of two squares formula, we simplify this to

Rearranging factors, we get

Now, with some simple algebra we obtain that the coefficient of

in this expression is given by

If two polynomials are equal everywhere, then all coefficients must be equal; and this product is equal to the power series expansion, so we deduce that

, we obtain the famous solution to the Basel problem:

However, as we stated, this proof is not rigorous enough, despite finding the correct answer.

Now, since we know the answer, we are ready to give a rigorous proof. Using Fourier analysis, we know that for a function

that is defined over the interval

the Fourier series is given by 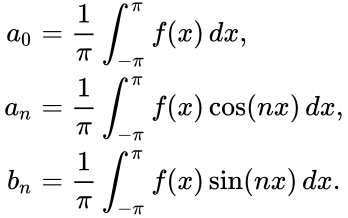 We start out by finding the Fourier series for

Since the function is even, the sine coefficients will vanish. That is,

. Hence we just need to evaluate

The sine term vanishes in the Fourier series because we will use integer multiples of pi in the sine function, and that yields zero, and the cosine function yields

. Thus, we are left with

This means we can write the Fourier series as

Now, the Fourier convergence theorem states that if

and piecewise smooth on

the Fourier series of

converges to a value

. If it is discontinuous, then it converges to the average of the left and right hand limits of

We can use this here as

is obviously piecewise smooth on the interval

If we simplify we finally have

Rearranging for the sum we have the result

and this completes the rigorous proof.