An antiderivative, also called a primitive, as its name implies, is the opposite of a derivative in calculus. That is, it is a function for which the given function is the derivative. It is important to note that there are an infinite number of antiderivatives for every function, since constants disappear during differentiation. For this reason, an arbitrary constant is often attached to the antiderivative, making an indefinite integral (not to be confused with an improper integral).

Antidifferentiation is generally much harder than differentiation. The more difficult integrals require some creativity and intuition to solve quickly, and some expressions are impossible to integrate algebraically.

However, some rules for differentiation can be used to make the task easier. For example, the constant multiple rule, i.e.

When we differentiate a function, we lose any constant term added to it:

So when we antidifferentiate, we get not one function but a family of functions that differ by a constant, known as the constant of integration. We denote this by writing

at the end of an expression.

What follows are some antiderivatives of common types of functions. 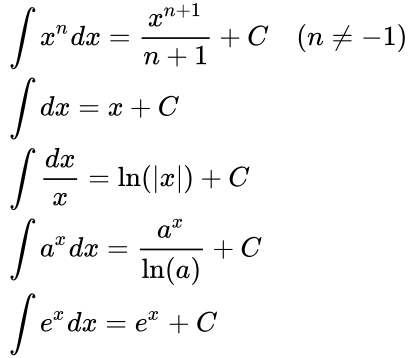